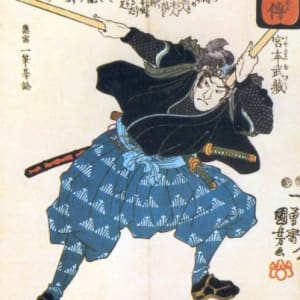 Miyamoto Musashi was a 16th-17th century Japanese samurai, ink painting (or sumi-e) artist and author of the classic strategy text The Book of Five Rings.

Miyamoto Musashi was born in 1584 in Mimasaka or Harima, Japan. He killed a man in single combat at age 13 and later became a ronin (masterless samurai). He invented the style of fencing with two swords, and claimed to have fought in more than 60 duels. According to legend, Musashi wrote his famous work on strategy— Gorin no sho (The Book of Five Rings), on his deathbed. He died in 1645.