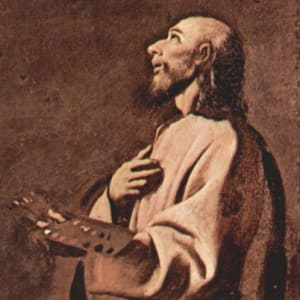 Francisco de Zurbarán was a Spanish Baroque painter who mastered a naturalistic style. The majority of his work followed religious themes.

Francisco de Zurbarán was born circa November 7, 1598, probably in Fuente de Cantos, Spain (the date and place of his baptism). As a teenager, he studied painting, and soon was creating pieces for monasteries in Spain. Later, Zurbarán also sent his paintings to the New World. As styles changed, his popularity began to fade before his death at age 65 on August 27, 1664, in Madrid, Spain.

Francisco de Zurbarán was born circa November 7, 1598, probably in Fuente de Cantos, Spain (the date and place of his baptism). As a child, Zurbarán showed a talent for painting, and was sent to Seville in 1614 to apprentice with the artist Pedro Diaz de Villanueva.

Success as a Painter

After finishing his training in 1617, Zurbarán moved to the town of Llerena, near Fuente de Cantos. After getting married, he worked for years as an artist-for-hire. Following the death of his first wife, María Páez, in 1623, Zurbarán wed Beatriz de Morales in 1625. The money and family connections Zurbarán’s second wife possessed were a boon for his career, enabling him to return to Seville.

At the time, religious orders were a significant source of work for artists, and Zurbarán pursued such commissions once he was in Seville. In 1627, he painted "Christ on a Cross" for a Dominican monastery. A masterpiece, the work secured Zurbarán's standing as a respected, sought-after painter. He received an invitation to stay in the city from the council of Seville in 1629.

As he mainly worked for monastic orders, the majority of Zurbarán's work consisted of religious imagery. Many of his theologically inspired paintings are simple, yet emotionally compelling, works that showcase his naturalistic style, as well as his skilled use of light and shadow. Zurbarán's few secular pieces include exquisite still life images, such as "Still Life with Lemons, Oranges and a Rose" (1633), and a "Labors of Hercules" series painted for the Buen Retiro Palace in Madrid.

Although Zurbarán was an accomplished artist, some of his work has revealed his limitations. The creations of his workshop were occasionally of poor quality, perhaps due to his unfit assistants. And when Bartolomé Esteban Murillo's work became popular in Seville, Zurbarán found himself displaced as the city's foremost painter, even though he tried—unsuccessfully—to imitate Murillo's style.

Zurbarán's career was at its height in the 1630s. In the 1640s, monasteries offered fewer commissions, reducing his opportunities. With his domestic market in decline, Zurbarán turned to the New World, exporting a number of canvases. However, fleet seizures kept him from receiving some payments, which exacerbated his financial difficulties. In the 1650s, he once again focused on domestic commissions, though Zurbarán no longer commanded the high fees he once had.

Zurbarán moved to Madrid with his third wife in 1658. He died there, in straitened circumstances, on August 27, 1664. Zurbarán's artistic reputation may have varied during his lifetime, but today his best pieces mark him as a leading painter from the Spanish Baroque period.